Hello. Where have you been? I missed you. Ok, I know it’s me and not you. Actually, I’ve been busy and got in quite a few hours up at the lottie over the last fortnight. It’s desperate for rain. I know it’s not what you want to hear on a bank holiday but I did try and order some. The lack of rain is starting to concern me. I water the polytunnel on every visit but I don’t normally do the outside. I “grow them hard” to quote Monty. Well, there’s hard and there’s bolting / dying so they were watered today. I haven’t bought the drill yet for the drill powered water pump and even if I had, there’s no water left in the butts. I met one of the organisers of Bridgwater Flower show on Friday and he has 30 water butts!! They’re on my list. Off my list, because they arrive on Tuesday, is an irrigation set up for the polytunnel – sprinklers and drippers (no less). The conservation of water is going to be a serious quest in the next couple of years.

The other big news of the week is that mice have eaten my strawbs. Having put them in baskets to avoid slugs/snails, it’s the mice who have reeked havoc. I think they climbed the staging and then jumped onto the runners, like a rodent tarzan. They have joined the ‘swines’ list. 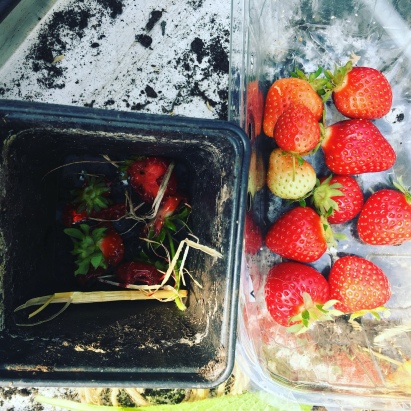 As I can’t remember quite what I’ve done over my multiple visits I think I’ll just do a review of where I’m at.

Bed One: Rhubarb, hops and parsnips. Parsnips are doing fine and I’ve sown some catch crops of radish, beetroot and lettuce.

Bed two: Potatoes – earlies (I think – need to check the label). I got some super cheap compost this week (£2.50 for 70 litres!) so earthed them up with this. 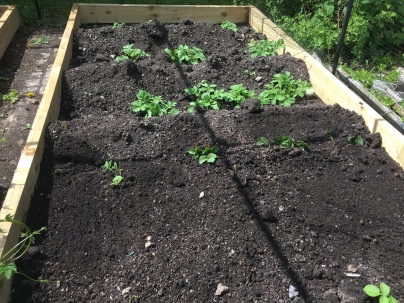 Bed three: Potatoes – mids (wilja, I think). Earthed them up too.

Bed four: Bit of an odd one this. It’s meant to be my perennial veg bed so it has globe artichokes, sea kale, raspberries (don’t ask – they’re not permanent), a perennial onion, apios americana and asparagus. The latter, you’ll remember I added to this year. I’ve now stopped harvesting from the original asparagus plants. Not quite sure how long you should crop from them for. I’ll put it on my list of questions for Monty, should I ever meet him! The artichokes are looking great. The web says to harvest them in July but with all the good weather I think we’re a couple of weeks ahead. I’ll keep an eye on them.

Bed six: Cauliflowers, celeriac, courgettes. The celeriac has been munched but I don’t think it’s snails/slugs. I think it’s ants. I was going to buy some more plants but I’ve noticed in bed ten that there are some seedlings in there. I let a couple of the celeriac that were in bed ten last year go to seed and they’ve now germinated. There’s space left to plant in this bed.

Bed seven: Leeks, beetroot and vegetable spaghetti. Nothing much to do in this bed other than weed and water. There’s a big gap to plant in this one too.

Bed eight: purple sprouting broccoli, turnips and carrots. I sowed the latter last week so no show there. This bed is notoriously weedy because the soil is so good.

Bed nine: The self-seeded Parsnips and shallots. I’m slowly pulling out the parsnips from the bed, because they are overshadowing the shallots. They taste ok (the parsnips) not as sweet as they would be after a frost but still edible. I’m using the rest of the bed as a nursery bed for brassica seedlings. I had run out of compost and small pots last week so bunged the leftovers in here. 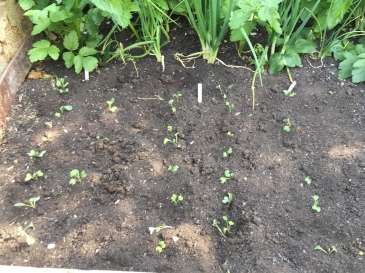 Bed Ten: This was intended for onions, garlic and shallots but I interplanted with spinach, radishes and lettuce so I’m cropping from these.

Bed Eleven: Peas, soya beans, french beans. I’ve been clearing the last of the carrots from this bed. Suddenly there seems to be a lot of flowers and flat pods on the first row of plants. Makes me chuckle to see the pods being so intently inspected by hubs. Following the strawberries this is the second crop that seldom makes it to the plate. Not so much growers’ reward as the ‘growers’ entourages’ reward’.

The Polytunnel: Olive tree. I know. It’s massive. It gets pruned to keep it in check. We’ve had one olive and it didn’t ripen but I wouldn’t ever dig it up. Also peppers, aubergines, tomatoes, carrots, cucumber (struggling), rocket, walking onion (finally worked out what it was) , strawberries in hanging baskets, purple sprouting broccoli. I really need to move the latter out. There’s also some staging with my seedlings/young plants on: pumpkin, patty pan, cauliflowers, broccoli etc Inevitably, there are some things that I have germinated that I’ve completely failed to label. They look like young sweet potato plants but can’t be. I will just have to wait to see what they produce.