Temp: So I bought another thermometer, a proper mercury job. Got it out the packet, noticed it too wasn’t working properly, put it back in the packet. I will be returning it….

Looking at this blog, you’d think I’d not been to the lottie but I’ve made a few visits over the last couple of weeks. This post will be somewhat of a catchup – if I can remember.

Hubs sparked a bit of panic when he announced that a heatwave has been forecast. Three months of very high temperatures thanks to a Spanish Plume, according to ‘he who listens to the radio all day’.  Watering is already the most time consuming job and I’m currently only doing the polytunnel so it’s time to make watering efficient. The lack of a tap has resulted in a few experiments such as water tanks (gravity), Ollas and the current, re-used pop bottles. For some time I have been eyeing up a solar powered water butt pump but as my ability to buy solar powered items is as good as my ability to buy working thermometers, I’ve been a little hesitant, particularly given the cost. A suggestion on a gardening forum is to use a drill powered pump. Needless to say one is on order from Ebay and I shall give you a report in the not too distant future.

You may remember that one of my tomatoes in the polytunnel was not faring well. I thought it was down to cold nights but some of the others have now started to show the same mottled leaf. Turns out, the manure I put at the bottom of the pots is not as ‘well-rotted’ as the packaging people would have me believe. As a result, the continuing-to-rot manure has been leeching nitrogen from the plants. I’ve bought some special feed to try and redress this. Cosseted tomatoes? Probably.

Despite the butternut squash putting in an appearance last week, a slug has assassinated them. Swine. Quite a small swine – but a swine nonetheless. I’ve sown replacements. 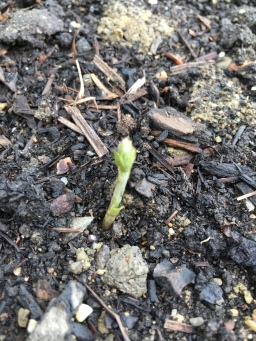 On a positive note, I think one of the Apios Americana has sprouted. A small, lowly shoot has appeared, looking up at the massive arch above it. It seems to be stretching out, undaunted, to reach the first rung. Good luck little ground nut.

A couple of the Crown Prince are up, plus one Patty Pan. Potted up the caulis, vegetable spaghetti and courgette.

Harvesting: radishes (the size of golf balls), spinach, lettuce, asparagus and a few green strawbs (Victims of my over enthusiastic watering – I took the baskets down to give them a soak.)

Sown: Last week – Borlotti beans, radishes, beetroot, cauliflowers, cabbages, broccoli, sugar snap peas, lettuce, walking stick kale and wasabi rocket. Ha! Get me! Wasabi Rocket. Honestly, some of my purchases….the latest delivery includes loofah (thank you Gardeners’ World), lemongrass, alpine strawberries and red cabbage. I’ve also bought some turnip ‘Golden Ball’, which according to an article in Kitchen Garden is better for storing over-winter. And that has lead me to a bright idea for next year!

What? No, I can’t tell you now. No. I won’t forget. Promise. Got to leave you coming back for more… x